There may be some who know more about the Scots in Canada than him [Harry McGrath], but I have yet to meet them. It is not simply his tales of Scots past in the history of Canada, but his knowledge of Scots present in modern Canada. (Kenny MacAskill, Cabinet Secretary for Justice, Scottish Government, from Wherever the Saltire Flies, Kenny MacAskill and Henry McLeish) 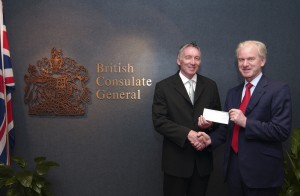 I was born in Glasgow, Scotland and am  a dual citizen of the UK and Canada.

From 2003 to 2007 I was the Coordinator of the Centre for Scottish Studies at Simon Fraser University in British Columbia. At Simon Fraser I taught, and promoted the teaching of, Scottish themed courses in university departments, introduced oral history and archive programmes to preserve the memory of the Scots in British Columbia, and forged links between the university, the local Scottish community, and modern Scotland. I hosted numerous Scottish guests at the Centre for Scottish Studies including the first two Presiding Officers of the Scottish Parliament, Lord Steel and the Right Honourable George Reid, and Justice Minister Kenny MacAskill.

In 2008-2009 I was the Chairman of Cultural Connect Scotland which was based in Edinburgh. CCS ran a major photography and video interview project called “This is who we are” which linked same-name towns in Canada and Scotland. The project involved people across Canada and Scotland and culminated in an exhibition at the Scottish Parliament and a reception on St. Andrews Night 2009 hosted by CCS, the First Minister, the Presiding Officer and the Canadian High Commission.

I am the Chair of the Dot Scot registry,  a not for profit company set up to establish a top level internet domain for Scotland. I am also the Scotland based special adviser to Simon Fraser University’s Centre for Scottish Studies and an adviser to the Scottish Government’s ‘Team Scotland in Canada’.

I am the online editor of the Scottish Review of Books. I write the only column in Canada regularly dedicated to Scottish affairs in Vancouver’s Celtic Connection newspaper and review books for The Herald and Sunday Herald. I have also written features and opinion pieces for the Globe and Mail, the Montreal Gazette, the Observer, the Vancouver Sun, Holyrood Magazine, Bella Caledonia, the Scottish Review, and ForArgyll.

I am a regular commentator on Scottish issues in the Canadian media, one of the ‘issues and experts’ team at Simon Fraser University and was the media spokesman for the British Columbia Highland Games for three years.

I have participated in several discussion panels on the role of the Scottish diaspora and conducted video interviews with returned emigrants for the “Scotland: A Changing Nation” gallery at the National Museum of Scotland.

In 2014 I will be chairing a conference session at the national museum entitled ‘How the diaspora sees modern Scotland’. Panel members will include Dame Helen Liddell, David Speedie from the Carnegie Council, and Laurie Anderson, Executive Director of Simon Fraser University.

I am the author of a unique report on the history, culture, employment profile, and demographic distribution of the Scots in Canada. The report was sponsored by Standard Life.

A selection of my writing can be found on journalisted